The Caucasus - the bike trip

See the slide show
the route itinereary,
and a timeline for the civil war in Abkhazia if you're interested. 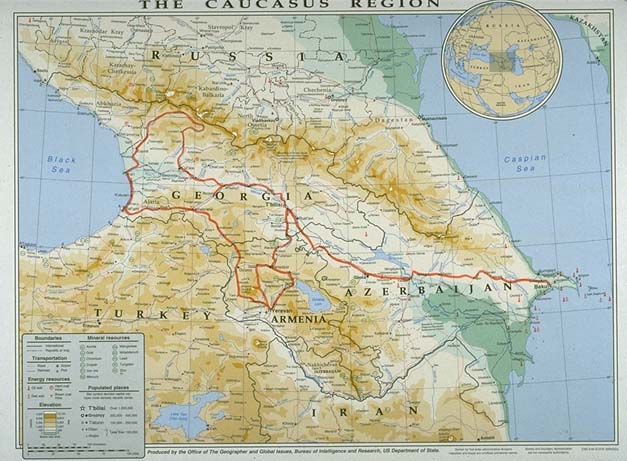 Our route. Starting in Tbilisi, we went east thru the Caucasus to the Black Sea. From Batumi, we climbed up to Armenia. From Yerevan we hiked up Mt. Aragats (13,500 ft) before going back to Tbilisi and out to Baku. From Baku we took the train back to Tbilisi.


As the Soviet Union dissolved, the Caucasus erupted. The Abkhazians declared independence from Georgia, then were victorious in a bloody battle. Georgia was further racked by civil war. The Ossetians vowed to band together to form an independent nation. Soldiers of the mighty Russian military sold their guns to Chechnyan shopkeepers to buy food that their commanders were unable to provide - only to find those same guns trained them in vicious offensives that would ultimately leave 80,000 dead. Armenia and Azerbaijan went to war over the mountainous region known as Nagorno - Karabakh, a war that produced an estimated 30,000 dead and 500,000 refugees.

The Caucasus, a mountainous Montana-sized area sandwiched between the Black and Caspian Seas, has always been home to a myriad of distinct peoples with strong nationalistic identities (over 50 languages are spoken). With the strong arm of the Soviet Union gone, people that had lived in relative harmony for the last seventy-five years set out to accomplish their nationalistic ideals. Neighbors that once saw their children intermarry suddenly woke up at war with each other.

By the fall of 1996, the guns had quieted and I set out with a friend to bicycle through this area for five weeks. (The war in Chechnya raged on, but luckily the spine of the Caucasus, reaching upwards of 18,000 feet separated us). We believed that we would be safe and that we would discover all that was good about Georgia, Armenia and Azerbaijan - a stunning harvest of fall crops, cooked to perfection by some of the world's most hospitable people. We would drink homemade wine that always flowed. We would bike over the tallest peaks in all of Europe, through lush valleys, and to the shores of the two greatest inland seas in the world. It was a rare chance to visit countries that had had very few Western tourists, and now were suddenly open. We visited countries that, despite an awful last few years and serious ongoing economic problems, reaked of optimism and celebrated life. We had high hopes, and we were not disappointed.

The journey's highlight was The Republic of Georgia. Georgians are a proud people with a unique language that have managed to hang onto their home despite continual onslaughts. Literally at the crossroads of Europe and Asia, their capital, Tbilisi, has been sacked sixteen times, by Mongols, Greeks, Hittites, Romans and Byzantines. Georgia has always had a strong independent tradition; five years ago, they became the first former Soviet state to stage multi-party elections. While peoples of other post-Soviet states wallowed in the misery of the fall of their once-grand union, Georgians were joyous that the system that had been forced upon them was now gone and that they were once again an independent nation.

If you like this trip journal, check out the Inner Asia Expedition '95.